The Rufous-collared Sparrow (Zonotrichia capensis) is an American sparrow found in a wide range of habitats, often near humans, from the extreme south-east of Mexico to Tierra del Fuego, and on the island of Hispaniola. It is famous for its diverse vocalizations, which have been intensely studied since the 1970s. The rufous-collared sparrow is 13.5–15 cm (5.3–5.9 in) long and weighs 20–25 g (0.71–0.88 oz). The adult has a stubby grey bill and a grey head with broad black stripes on the crown sides and thinner stripes through the eye and below the cheeks. The nape and breast sides are rufous and the upper-parts are black-streaked buff-brown. There are two white wing bars. The throat is white, and the underparts are off-white, becoming brown on the flanks and with a black breast patch.

Young birds have a duller, indistinct head pattern, with brown stripes and a buff ground colour. They lack the rufous collar, and have streaked underparts.

The rufous-collared sparrow feeds on the ground on seeds, fallen grain, insects and spiders. It will sometimes join mixed-species feeding flocks and has been observed to pick termites from spider webs. It is usually seen in pairs which hold small territories, or in small flocks. Tame and approachable, it is common throughout its large range and not considered threatened by the IUCN.

The breeding season is limited by food availability and ultimately rainfall. In the subtropical yungas of north-west Argentina, females begin to build nests around the end of October, when the wet season comes, but by early December most nesting activity has already finished. By contrast, 2,000 m (6,600 ft) Above sea level, in the Andes of Pichincha Province (Ecuador), eggs were being incubated in December, and nest-building activity recorded in March and April, suggesting extended breeding throughout the wet season. The open cup nest consists of plant material lined with fine grasses. It is constructed in matted vegetation on the ground, low in a tree or bush, or in a niche in a wall.

This Rufous-collared Sparrow is listed # 221 on my lifer list. 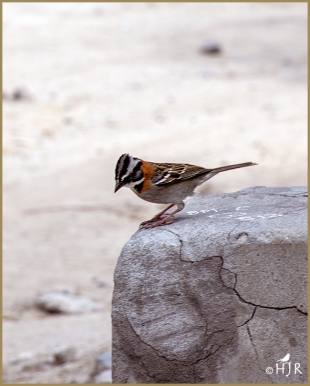