The Limpkin (Aramus guarauna), also called carrao, courlan, and crying bird, is a bird that looks like a large rail, but is skeletally closer to cranes. It is the only extant species in the genus Aramus and the family Aramidae. It is found mostly in wetlands in warm parts of the Americas, from Florida to northern Argentina. It feeds on molluscs, with the diet dominated by apple snails. Its name derives from its seeming limp when it walks.

Limpkins are active during the day, but also forage at night. Where they are not persecuted, they are also very tame and approachable. Even so, they are usually found near cover. They are not aggressive for the most part, being unconcerned by other species and rarely fighting with members of their own species.

Because of their long toes, they can stand on floating water plants. They also swim well, both as adults or as newly hatched chicks, but they seldom do so. They fly strongly, the neck projecting forward and the legs backward, the wings beating shallowly and stiffly, with a jerky upstroke, above the horizontal most of the time. 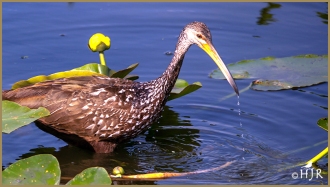