The Chilean Flamingo (Phoenicopterus chilensis) is a large species of flamingo at 110–130 cm (43–51 in) closely related to American flamingo and greater flamingo, with which it was sometimes considered conspecific. The species is listed as near threatened by the IUCN.

It breeds in South America from Ecuador and Peru to Chile and Argentina and east to Brazil; it has been introduced into Germany and the Netherlands (colony on the border, Zwillbrocker Venn). Also, a small population occurs in Utah and California. Like all flamingos, it lays a single chalky-white egg on a mud mound.

These flamingos are mainly restricted to salt lagoons and soda lakes but these areas are vulnerable to habitat loss and water pollution.

The plumage is pinker than the slightly larger greater flamingo, but less so than the Caribbean flamingo. It can be differentiated from these species by its grayish legs with pink joints (tibiotarsal articulation), and also by the larger amount of black on the bill (more than half). Young chicks may have no sign of pink coloring whatsoever, but instead remain gray.

The Chilean flamingo’s bill is equipped with comb-like structures that enable it to filter food—mainly algae and plankton—from the water of the coastal mudflats, estuaries, lagoons, and salt lakes where it lives. 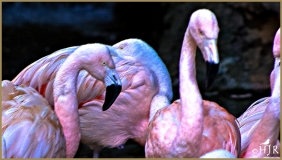